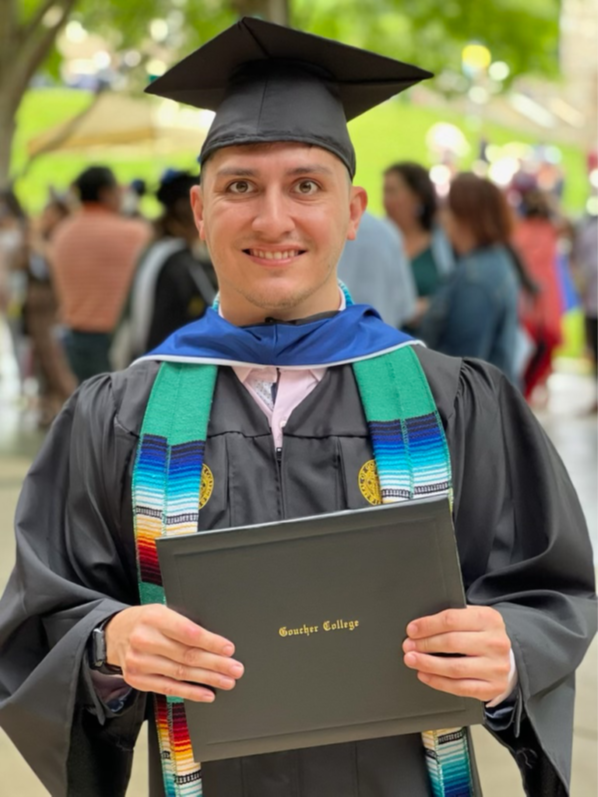 Carlos is 32 years old, lives in Maryland, and has cerebral palsy.

His life has been filled with obstacles, but despite all that he has faced, he’s remained determined to achieve his dreams.

Carlos was born in Ecuador, where the landscape of disability services was far scarcer, and discrimination far worse. They did not have classes or formal disability supports available. When his mother Maria took him to doctors, she was repeatedly told he would never walk or talk, would spend his whole life stuck in bed, and that “they should just let him die.” Unable to accept this as her son’s fate, Maria and her family left their entire life behind to seek out better and immigrated to the United States when he was four years old.

While the disability service system in the U.S. was a marked improvement, Carlos still faced difficulties growing up—many due to misperceptions and discrimination from those around him.

I was bullied in school. No one wanted to respect me. They made fun of me, how I walked…how I talked. I had trouble learning to walk and it took me until around 14 years old to walk without wheelchairs, walkers, and other devices. I had to learn English—it was difficult. I didn’t really have any friends and would sit by myself. I was sad. I don’t want that to happen to anyone else—it felt terrible.

Things continued to be challenging as Carlos graduated and transitioned into college.

In college, it was the same thing. People did not respect me or help me. Teachers have a lot of students and don’t care. I ended up leaving Salisbury University to finish my associate’s degree at a community college because they did not have the right program or supports for people with special needs. Then I went to Gaucher College and finished in May of 2022. It was so hard for me to do it, but I can do it.

Carlos is proud to have completed college and entered the real world. But even outside of the classroom, inaccessible public spaces and misperceptions still plague him as he navigates his adult life. He often falls in cities that do not have the access features he needs like ramps, curb cuts, and elevators. People often think he is drunk because of the way he talks and won’t let him into places—even after he tells them he has cerebral palsy—because they don’t know what it is.

They hear the way I talk, and they think I am stupid, but I’m not. I know what I am doing. I speak two languages and I’m good at math. I am proud of how far I have come in my life. I can walk by myself, I can use the bathroom alone, and I graduated from college. I want people to stop bullying handicapped people like me.

Carlos now works at TDezz Badass Creations as part of the accounting and management department. He likes the job and enjoys helping people. But he dreams of opening his own business or working in Washington, DC. He loves going to the movies and the mall, especially with his girlfriend Naya whom he met in community college. He loves his dogs, his siblings, and his parents who have been there for him through it all. He visits his relatives back in Ecuador often and is proud of his family.

Despite the challenges he has faced, he still chooses hope every day. He notes that “My biggest fear is that people won’t understand me, but I never give up. A life is nice to live and is beautiful. Life is too meaningful to waste.” Carlos is a resilient and determined man—but the barriers he has encountered, both in his physical environment and the perceptions of those around him, are harmful and limiting. As Carlos emotionally shared, “Everyone will be disabled at some point in their life. Things need to change.”

The post Despite Obstacles, Carlos Is Determined To Pursue His Dreams appeared first on The Arc.

Keep up with The Arc Georgia!!! Subscribe to our emails here!!